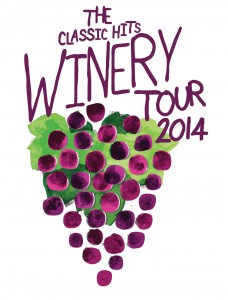 Civic Events, promoter of the annual Classic Hits Winery Tour, is proud to reveal the tour dates and line up for the 2014 Summer Tour: Headliners are New Zealand music legends The Exponents, joined by pop superstar Stan Walker and the heavenly voice of Breaks Co-Op.

Now in its 8th year, the 2014 Classic Hits Winery Tour presents 17 shows across 16 spectacular outdoor venues from Tutukaka in the North, down, for the very first time, to Invercargill in the South. A full list of dates and venues is set out below.

Since performing their first ever gig on vocalist Jordan Luck’s 20th birthday, The Exponents have earned an unparalleled reputation for iconic, smash-hit laden, singalong live shows, performed to generations of fans up and down New Zealand.

2011 marked the 30th anniversary of the group, which sparked not only the release of their ‘best of’ album Why Does Love Do this To Me: The Exponents Greatest Hits but also a feature television documentary about the band entitled simply… The Exponents.

The Exponents will be bringing all of their hits along with a very special stage show designed specifically for the Winery Tour. Seeing The Exponents live is a rite of passage for New Zealanders, seeing them perform in the stunning Winery Tour settings will be something unique and not to be missed. It’s going to be quite a party.

Filling the middle slot and fresh from a sell out nationwide tour is Stan Walker.  As formidable a live performer as he is a judge, with a raft of hits that rivals even The Exponents, Stan Walker is quite simply a musical force.

Stan will be bringing his full live stage show to the Wineries and not only will he be performing all his well-loved hits, he will be introducing songs from his stunning new album “Inventing Myself” including singles Take It Easy, Bulletproof, Inventing Myself and the brand new Like It’s Over.

Completing the three-band line up is Breaks Co-Op, returning to the stage for the first time since their massive hit “The Otherside” ruled the airwaves and singles chart a few years ago. Featuring the incredible velvet and honey voice of Andy Lovegrove, Breaks Co-Op have a brand new single Sounds Familiar out this month and will release their first new album in 8 years in January 2014 – right before the Winery Tour kicks off.

Jordan Luck and his fellow Exponents cant wait to kick off the tour on 31 January.

“I’m off the piss and we’re hitting the wineries…go figure!  We can’t wait.  We’ve heard about this legendary tour for years and to be invited to take part with Stan and Breaks Co-Op is a real thrill. We are excited about putting on a really memorable show, with all the hits. We’re rehearsing now! Winery Tour fans can expect something really special.”

Stan Walker says hitting the road for a Kiwi summer on the Winery Tour is something he’s been dreaming of for years.

“Sharing the stage with New Zealand music royalty in the most beautiful outdoor settings that Aotearoa has to offer?  What an absolute blessing. I can’t wait for everyone to come down and have a bit of a dance and a sing-along with me.  It’s gonna be mean”.

“I’ve been recording the new Breaks Co-Op album in England and I can not wait to get back to New Zealand and spend a long, hot February travelling to the most beautiful parts of the country and bringing our music to life on stage.  I honestly can not think of a better way to spend summer.”

Co-promoter Campbell Smith is looking forward to next year’s Tour and promises concertgoers a unique and unforgettable experience:

”This tour is about great NZ music, great NZ wine and food, stunning locations and the warm and balmy nights of February.  It’s all about feeling good with friends and family, kicking off your shoes, having a wine or two, a dance and singing along. The Winery Tour is what summer is all about; there is nothing else like it.

And we are thrilled to return to Palmerston North and to be adding two new shows to the Winery Tour run for 2014 – our very first gigs in Greymouth and Invercargill. You don’t get much more “NZ” than the West Coast and the deep South, we cant wait to bring some Winery Tour goodness to your provinces!”

Sign up to the Winery Tour database www.winerytour.co.nz or become a friend on Facebook www.facebook.com/TheWineryTour to be the first to hear about presale information / competitions / giveaways and other Winery Tour news.