SOMETHING BEGINNING WITH C RELEASED ON VINYL FOR THE FIRST TIME!
by pushsupport on November 6, 2015 in News Releases 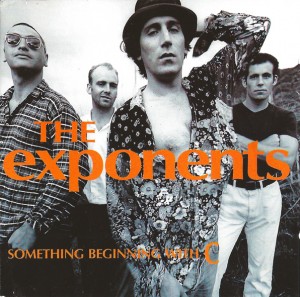 To celebrate The Exponents being honoured with the 2015 NZ Herald Legacy Award and their induction into the NZ Music Hall of Fame, Universal Music are proud to announce the first ever vinyl release of the group’s classic 1992 album Something Beginning With C.

Carefully re-mastered for vinyl by Steve McGough at Stebbing Studios, the limited edition double album finally captures the true spirit of the recordings and lets you hear the album in the way it was always meant to sound.

The album was a massive hit, debuting at number 1, delivering three top 5 singles and going triple platinum in the process.

However, ever since its release there has been debate about the sound of the record. In his 2009 book 100 Essential New Zealand Albums, Nick Bollinger touched on the issue:

“I used to think that Something Beginning with C was underdressed. This album sounds as if the Exponents walked into the studio, plugged in, played their songs through once (and maybe once again for luck) and walked out again. Listening to it more than fifteen years after its release, I realise the album’s offhandedness is its great virtue.”

After initially working with Paul Streekstra, who delivered the pristine production of “Why Does Love Do This to Me”, the unusual decision was taken to record the rest of the album with Duffy, a virtual novice at recording a live band. With guitarist Brian Jones guiding him, Duffy and the group delivered an album that captured the raucous spirit of a band getting a second chance. Every whoop, laugh and holla in the studio makes its way onto the finished record and the energy is infectious.

“Declaring the spirit in which it was recorded, the album kicks off with a total throwaway, ‘Come On In’ which breaks down amid laughter after just 45 seconds. Remarkably, even this fragment – barely a chorus in length – has the Jordan Luck kiss of pop magic: it sounds like a potential hit”

The album was originally released on CD and cassette, two formats that never really expressed the energy, dynamics and space of the studio recordings. With the release on vinyl twenty-three years later, fans can now hear this classic album the way it sounded being played back in that Auckland studio in the summer of 91-92.

The limited double vinyl edition features the original 15-track album on sides one, two and three with side four containing six b-sides that appeared on the singles taken from the album in 1991 and 1992.

SOMETHING BEGINNING WITH C, THE LIMITED DOUBLE VINYL EDITION WILL BE RELEASED ON NOVEMBER 13th.